I recently took a class on how to make embossed greeting cards. My girlfriend's birthday was coming up, so I decided to make one for her.

The envelope started as a square of medium-thick paper. I folded it along four lines with the help of a scoring board. I then centered a paper stencil under what would become the back of the envelope, and used an embossing stylus, rubbing quickly on the paper like I was taking a rubbing with a crayon. This kind of scratches up the side of the paper so it's important to do on the inside of the envelope. To finish, I cut a few small triangles out of the paper, and folded to make an envelope that I could glue together. 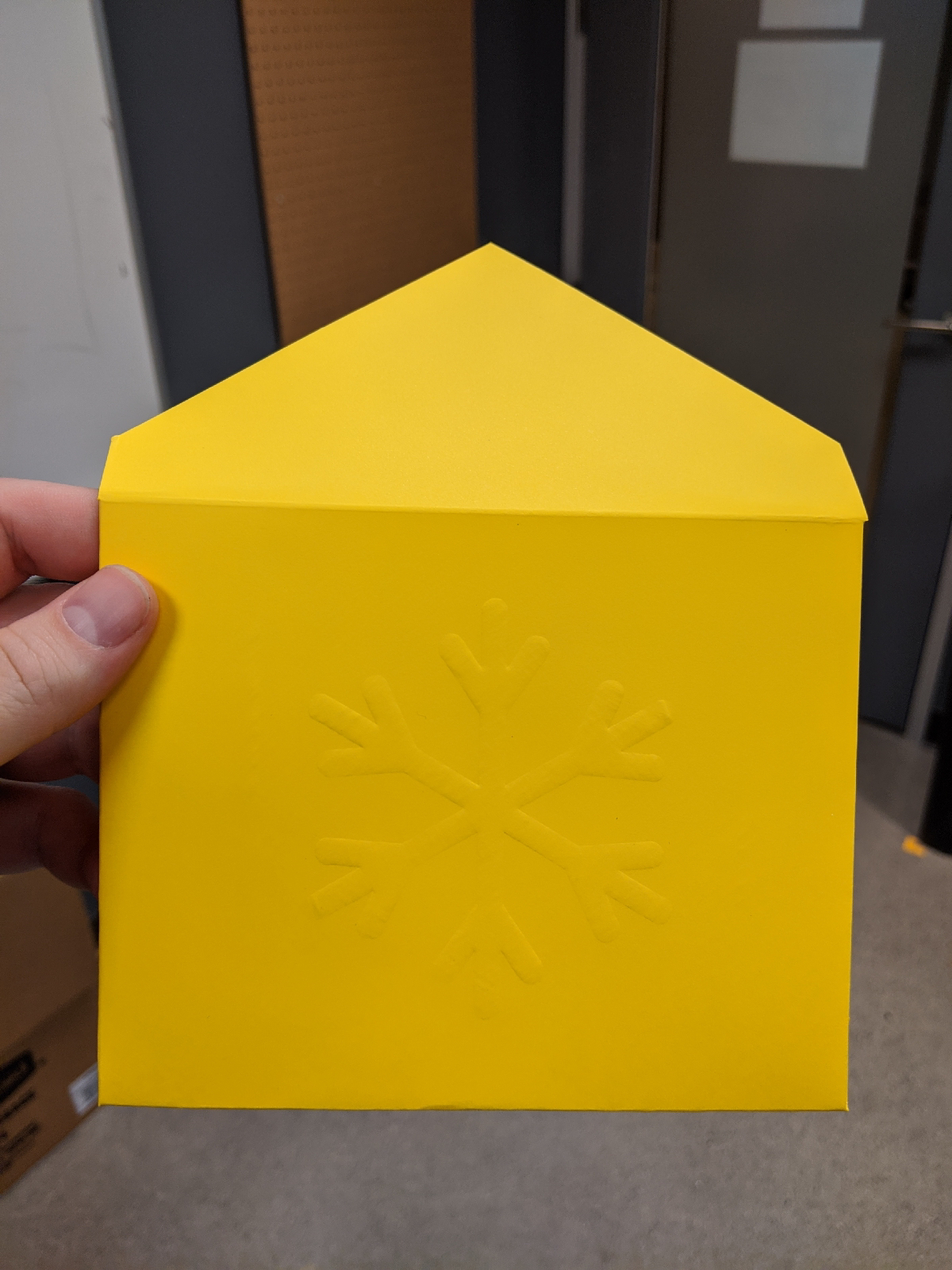 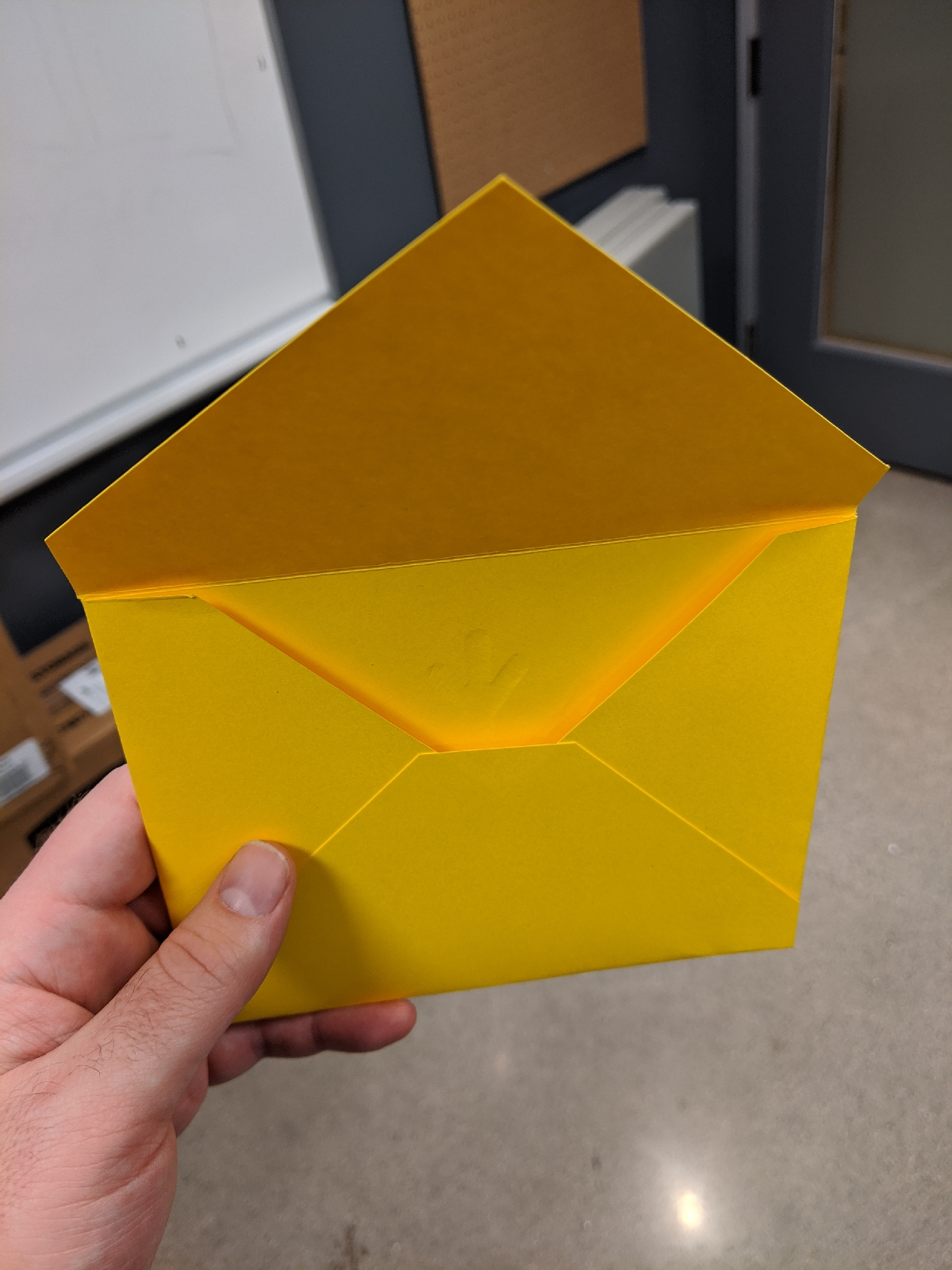 For the card itself, I used a nice, thick card-weight paper. I wanted a cutout of a moon and stars for the front, and a message on the inside. I had access to a laser cutter I know how to use, so decided to go with that. My first tests showed that the side facing away from the laser would have some visible charring when cutting, while the side facing the laser was clear. This meant I needed to run twice, cutting on one side of the paper and etching on the other, since it would be folded over and the inside of the front was going to be hidden. This also meant I had to be very careful about how I oriented things, to avoid flipping the cutouts.

A couple things that came up while working on the card with the laser cutter:

Finally, I cut a piece of the silvery paper down to about the card's size, painted glue onto the inside of the front of the card, being careful not to get too much on the edges of the holes, and let it set with something heavy on top of the closed card for a few minutes. It wasn't terribly well attached, but worked well enough for a card. I also trimmed some stray edges using it a straightedge and rolling paper cutting blade.
All in all, I think this took me about 2 hours. However, that was entirely after the class. I could have made this card during the class, but I made too many mistakes in my first attempts and decided to start over after it was done.

Mistakes and Failures
The main troubles I had were in orienting the paper. On my first few tries for the envelope, I either embossed on the wrong side, or forgot to until I had already glued it together. I also glued without really thinking about what was happening, and as a result one time glued the envelope entirely shut. For making the card, I had the charred side for the laser cutter the visible on the outside one time, and another time I had folded the card before putting it into laser cutter, and the laser pretty much require that it be perfectly flat. When I was gluing the silvery backing on, I put too much glue around the stars, and it leaked through and stuck to the paper underneath, ruining that card. I made a reminder sheet to keep visible for when I actually made the card, which helped me look out for some of these common mistakes.
Posted by Eric W at 9:09 PM No comments:

Hello World, but for a project blog

Hello! I'm Eric (my.pronoun.is/he) Sometimes I make things, and it would be nice to be able to share what I did and learned. I don't like any of the current social media platforms for this, and I think the way blogs have been somewhat abandoned in the past decade was a mistake. So, here's a new one.