I have a (Google) Wear OS smartwatch, the LG Watch R. It's pretty old now (for a smartwatch), and a few months ago, the strap broke. I bought a nice purple replacement.

But, the replacement strap is made of a much firmer material than the old one was. Now, the watch won't easily sit in its charging cradle, because the straps push down and lift the watch up, making it difficult to charge. 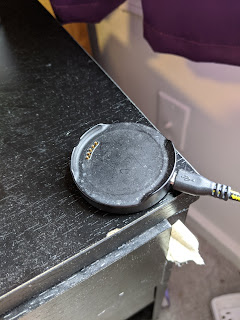 The charging cradle for the LG Watch R, a plastic disk with a raised lip to hold the watch in place, and metal contacts. 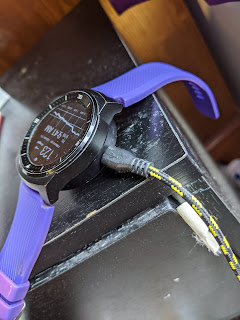 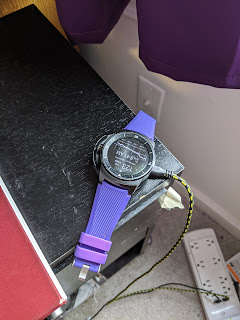 The misalignment means the contacts in the cradle don't line up with the watch's. Even when they do align, sometimes there's too little pressure for the watch to charge consistently.
There are chargers which are lifted higher to help solve this problem, but I don't have one (well, I do, but it's in the office that I haven't been to since March).
For a while, I was solving the problem just by balancing the charger on a small box, but this was easy to knock over, as it was too light and didn't help hold the charger in place.
I decided to make a support out of air drying clay. 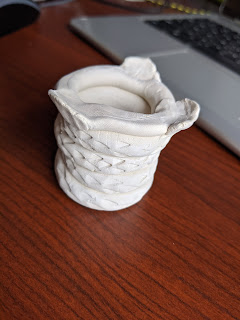 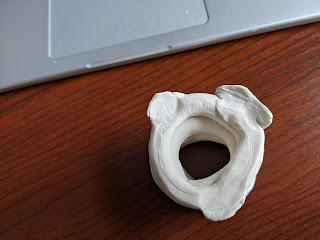 It was easy enough to use the standard coil like for a pot. Since I didn't need to hold anything inside it, I didn't make a bottom.
For the top, I tapered the clay so that the spiral would flatten out. I also pressed the charger down onto the wet clay, making a better surface for it to sit on. I pinched out the three ridges along the edge, and supported them with additional clay, to help keep the charger put.
Around this point I was inspired by clay items I've seen before like these: 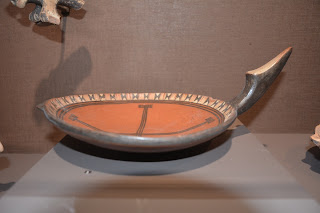 While mine looked rather boring by comparison. I used one of my clay tools to push a series of little triangles all up the coil, kind of suggesting scales on a snake.
When it had dried, I found that the "scales" gave it a particularly nice texture to hold.
Drying shrinks this kind of clay slightly, so there was a chance that it wouldn't work out when I placed the charger back on top of it.
I'm glad to say that it worked! 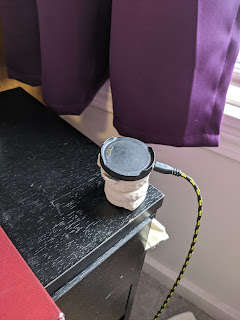 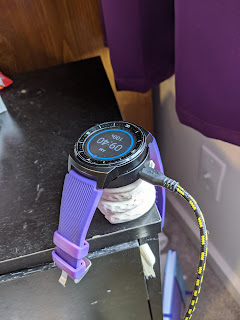 Possible next steps include adding a mild adhesive to keep the clay in place, and attaching the wire to the side of the cabinet to keep it from getting in the way.